First time, we did an exclusive interview! Let us know your thoughts! 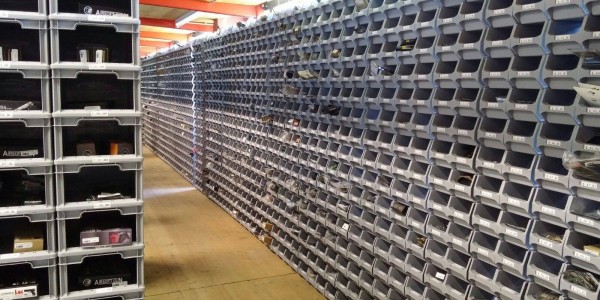 This is something new for you and us, appart from news we decided to do our first ever interview! You still remember AA Store from Austria? They launched their international online shop in 2018 and have become partners of NLAIRSOFT.COM since a few year now. They send to all 28 EU countries, straight from their warehouse in Austria. Those countries include The Netherlands and Belgium too.

The AA Store boasts one of the largest Airsoft assortments in Europe. Operated by Airsofters with years of experience they ship orders by registered mail with tracking number & insurance coverage to all EU countries. We thought it would be time for a nice interview, check the full story and hit the continue reading button below.

Tell us a bit more about yourself? Who is Andreas?
Andreas aka Andy is the AA Store owner. The rest is private :)

How did you get involved in Airsoft in the first place?
A close friend of mine told me about Airsoft back in the early 2000s and it instantly sparked and bushfire. A whole group of friends immediately bought pistols and AEGs as well as all the necessary gear. At least we didn’t have to decide as only Marui and a few other brands existed back then.

What was your first Airsoft gun and which one do you use now?
That was a Marui MP5A4. I loved it. I took it apart so many times and it would still work after years. However, it did not remain the only AEG and soon heaps were piling up. Many players know the gun-buying issue I guess and I wasn’t different. For some time now my ready-bag contains a GHK G5 Gas Blow Back Rifle. I was stunned by its recoil, gas capacity and overall weight to performance ratio from day one. As a side arm I use a KJ MEU model. I’ve always been into that particular pistol, owning a custom Western Arms 1911 MEU early type model for my Force Recon loadout during my more active days as well as a real steel 1911 later on for the range.

Do you still play airsoft on a regular base yourself? If so, what is your favorite playground and game type?
Nowadays I play very seldom. I simply don’t have time and after six days of working with Airsoft I tend to seek other activities on the seventh. Being a proud family father also brings other responsibilities with it that I happily indulge in. As for the preferred game and site type; Anything can be interesting. I like grill-sims on large grounds as much as a fast and intense CQB battles. At the end of the day it all depends on who you are with. That’s a core ingredient of this sport: The guy next to you and the fun you have.

Your store is well established for years, where and how did it start?
It all started with the need for gear and equipment for myself. Back in my active days there were not many Airsoft shops out there. Naturally we would order all together from around the globe to split costs which soon escalated to large monthly recurring orders, all operating out of my apartment. At some point my better half banned me from doing so, I guess that happened around the time when the carton-box to furniture ratio flipped and the apartment started to look more like a warehouse. I moved my small-scale operation to the cellar which didn’t work out at all due to the lack of space. Soon after that we had to relocate into the first rental facility and with it the official AA Store was born. That was in 2009 and since then we steadily grow. In 2012 we moved into our current facility in which we are still residing today, only that we had to expand every year.

Who works at the AA Store?
Everybody working at the AA Store has an Airsoft background and we are very proud of this fact for various reasons. One surely is that we exactly know what we talk about and what our customers want.

What do customers most appreciate about AA Store?
From what customers tell us: Our service. When you write or call us you have person on the other end who knows what’s up and what you need. We are playfield buddies but at the same time professionals who serve our clients fast, reliable and comprehensive. Other than that our large assortment and that we very often have the newest and highly sought-after products in stock before many other shops do. And the online shop which is modern, intuitive and reliable. We spend a lot of time to perfection it.

What is your biggest mile-stone the past years?
That be the opening of our new EU branch based in Austria I would say. It took a lot of planning to start something from scratch. Mind you, we are not a large-scale corporation packed with lawyers and university graduates from famous institutions and years of experience in setting up companies worldwide. We are just a bunch of guys at the end of the day with sometimes crazy ideas and visions. But we get stuff done.

Can you tell us a bit more about the shift towards the European store?
Switzerland as a separate stand-alone country, very well known as high-priced island surrounded by the EU, didn’t permit to grow internationally. We were simply not competitive. Our international sales would remain little if not marginal. We also kept on growing fast in the Swiss market expanding our warehouse space every year which proofed to become very costly. We came to a point where the logic step was to go beyond the country’s border. After a long period of thinking about different strategies we decided at some point very fast and built up everything within a very short time – it felt a bit like over night: From the decision day to the first packages leaving the warehouse it took only six months. Mind you, we had to recruit staff, find an appropriate location and build up a functioning warehouse that is filled with goods from the start and all this on a newly built website. And a coffee machine we also had to buy. We got that done pretty early. First things first.

What was your biggest struggle running the shop?
It is a big struggle to have the right partners in your endeavors. Be it an IT partner you can rely on, a functioning team within the company or your own family that sometimes has to take a step back when the working days go beyond 20 hours. Naturally there were also mistakes to be made and sometimes we fell too and it would hurt. It’s like when you run too fast thru an Airsoft field: You will learn fast when it hurts and won’t do it again.

At AA Store you are most proud of?
Most probably that I never planned for it to become what it has become after all those years. I was never dreaming of achieving a certain size of company, I just focused on what I love to do. Also that we were able to grow so much being known as a reliable partner to supply our customers. It makes us proud when customers are stunned by our service. It just makes you happy if you exceed expectations. Beside that we had many milestones when we would struggle at first but in the end achieved our goals. For example when you look at our streamlined warehouses with over 22’000 stock locations, all with a modern barcode-based system and handheld scanning devices etc. to manage the daily flow of goods. A couple of years ago it was a semi-organized mess in open shelves and you would know by heart where to find what. Or not. That’s when we would search and sometimes go crazy.

You have so many items in stock, are they really in stock? As this is unique in the Airsoft market!
I like to believe that our wide assortment is one of the cornerstones of our success and always has been. While other shops are focusing on only one aspect such as gear or HPA, we are a “full-player” offering everything, from shoes over vests to communication equipment and replicas. And not just a few pieces of each but many brands and many products. That’s again possible because of the staff we have, we know what is needed and we know how it all works.

Do you get frequent orders from The Netherlands? Especially after legalization in 2013?
We have been monitoring the Dutch Airsoft scene and were happy to see the legal progress with all the efforts that were put in. Not necessarily as a shop but as Airsoft players. It was great to see that for once it wouldn’t go the other direction such as a country applying more strict rules or even banning the sport. While we didn’t expect much of additional traffic we indeed started to get orders from NL soon after that and now even more with our warehouse in the EU. We ship daily to happy customers in the BeNeLux.

What is your commitment to development the Airsoft Sport as a whole? (do you support teams or event for example)?
For a very long period we invested a lot of time into the sport in Switzerland. We ran the largest national forum, we would visit and work with game sites but also support the local Airsoft association and work closely with governmental institutions. The latter was also necessary due to legal changes in 2008 when Airsoft replicas would become part of the weapons law and therefore turn into weapons. That made many things complicated and players were insecure about what was happening. We would take direct influence on legislation to ensure our hobby can be preserved and at the same time inform everybody with official reports. Nowadays our help is not needed anymore as younger activists have taken over the helm. But of course we still work with event organizers and some selected teams.

What are your ambitions for the next 5 years?
Without shedding too much light on our strategy as a company let me assure you that we still have many ideas. The amount of new visions definitely overweighs the time we have at hand and we need to take one step after another. For the moment there is certainly a lot of focus on our EU branch which is still in its baby shoes, growing constantly and steadily but at the same time healthy to ensure the good service customers are used to.

Some final famous last words?
I would like to take this opportunity to thank our customers personally. So many of you trust us daily. And if you read this whole text until here I also want to thank you for that :)

Thanks for the interview Andreas