Filed In The United States Senate 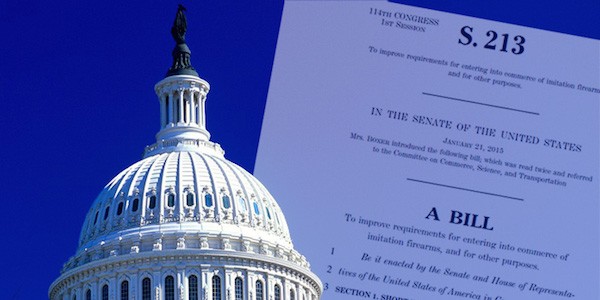 With all the news about incidents in which people, including children, are shot for carrying airsoft guns in public across the States, that soon it will get the attraction of a legislator in the U.S. Congress. Indeed, it has gotten the attention of Senator Barbara Boxer (D-California), that she filed Senate Bill 213 (S.213) on the 21st of January 2015.

Called the "Look-Alike Weapons Safety Act of 2015" it actually has a long title, the "To improve requirements for entering into commerce of imitation firearms, and for other purposes."

According to the US. Congress website, here is the summary of the Bill:

Amends the Federal Energy Management Improvement Act of 1988 to prohibit manufacturing, entering into commerce, shipping, transporting, or receiving any toy, look-alike, or imitation firearm unless the permanent color of the entire exterior surface is white, bright orange, or another specified predominant bright color. (Currently, imitation firearms are required to have only an orange plug inserted into the barrel.)

Revises the definition of "look-alike firearm" to include traditional B-B and pellet-firing air guns that expel a projectile through the force of air pressure. Maintains the exclusion of paint-ball guns.

For airsoft players all over the U.S.A., this means that the dreaded SB199 of Kevin De León in California which will take effect on 1 January 2016, might just become a Federal Law in the form of S.213. However the difference of SB199 from S.213 is that SB 199 requires certain portions if the imitation firearm (such as airsoft guns) apart from the orange muzzle to have 2 centimeter wide fluorescent colors. For S.213 it requires the entire exterior surface to have a bright color. You might as well convert all Nerf guns into airsoft guns.

The bill right now is in the Senate Committee on Commerce, Science, and Transportation after being read twice when it was introduced into the Senate.

What are the actions of the airsoft community in the U.S. to prevent the S.213 from progressing into the U.S. Senate so far? There are now moves to petition the U.S. Senators not to vote for the approval or lobby the members of the Senate Committee on Commerce, Science, and Transportation to pigeonhole it (the term for the legislative process of not doing anything).

But overall, there is still no concerted action by the U.S. Airsoft Industry and the Airsoft Community for a unified campaign against S.213. They might as well learn the ropes of lobbying quickly now as this is not California anymore, this bill when it becomes into a law, will cover the entire United States.

What to do now? It depends as there's no industry association at all (unless you consider the Airsoft Safety Foundation to be one), unless the Airsoft community is dependent on the NRA, NSSF, and other related industry associations to help kill the bill (it’s nice having allies). With the debacle that is SB199 in California, haven't the airsoft community learned its lesson of developing an effective lobbying effort (which means a national organization) to prevent airsoft from being regulated that it makes no sense to play it anymore? Airsoft associations in other countries which have stricter firearms laws than the U.S. have prevented such over regulation of airsoft on their own, why can't the U.S. airsoft community?

S.213 may just be the worst nightmare for the American airsoft player that might come true.