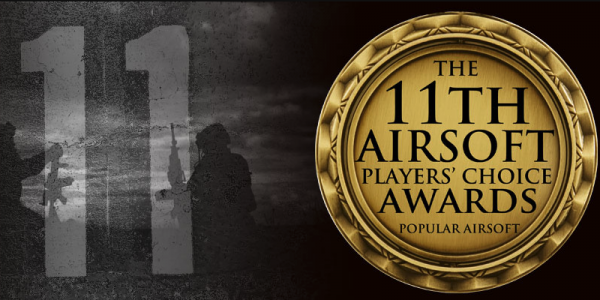 What has become the biggest online airsoft event, the Airsoft Players’ Choice Awards, is now on its 11th Awards Period. For a 2-month duration of the Awards airsoft players from around the world shall nominate and then vote for the best in the various awards categories.

Airsoft retailers, players, publications, manufacturers, products, blogs, communities, reviewers, videos, podcasts, and events are covered by this Awards event. Airsoft players worldwide get to vote on who they think deserves their votes and show their appreciation for those who have done a good job at serving the airsoft community. This is what makes the Airsoft Players’Choice Awards special as it takes into particular consideration the importance of the particapation of airsoft players as they are after all, the ones who benefit from the products and services of various airsoft companies and individuals.

Start your nominations today! Nominations are open to December 28th 2020!

Airsoft players worldwide get to nominate their favourites for the various categories for a period of almost one (1) month. They can either nominate in all categories or in categories they are familiar in.

Nominees can be nominated in one or more categories, provided that they meet the criteria.

The Voting Period allows the finalists to campaign that they get voted. They can post at their news section and forums; create vlog/blog, or a podcast; post Vote Badges at their websites; announce at social media sites to mobilise players to vote for them.

The winners will be announced one (1) week after the closing of the Voting Period. They will then be notified via email that they won. Airsoft players who won a raffle prize will also be informed via email.

For both the Nomination and Voting Periods, nominations and votes all of these are cast at the Popular Airsoft’s Airsoft Players’ Choice Awards Page (playerschoice.popularairsoft.com).