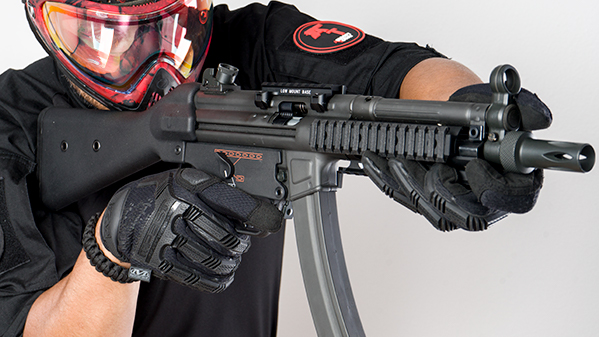 So hey!.. It’s been a while since I made a review and this time it’s a little bit different then what I previous had... the M4. This time I have a MP5 from Bolt it’s an EBB and at the beginning I was very sceptic about it because of the stories I've heard about the brand, but I can tell you it has blown my mind.

The Bolt Recoil Shock System (BRSS) was created so survival game players and military collectors alike can enjoy GBB simulated recoil and the joy of AEG sustained shooting. Since 2010 Bolt Airsoft did introduce their first models, beeing M4 models. Now they made their first step into the MP5 models. Read more about Bolt Airsoft here: http://www.bolt.tw/aboutBolt.html

The first impression that I had was not that good at all, the box was not treated well (tape around it etc.) when I opened the box and it is quite a big box for a short AEG I saw a metal MP5 with with a lot of polymer parts (external).The first thing that comes in mind is that this couldn't go very well if it's an EBB.

When I held the gun it felt pretty sturdy and solid, and it was heavier then what I expected. 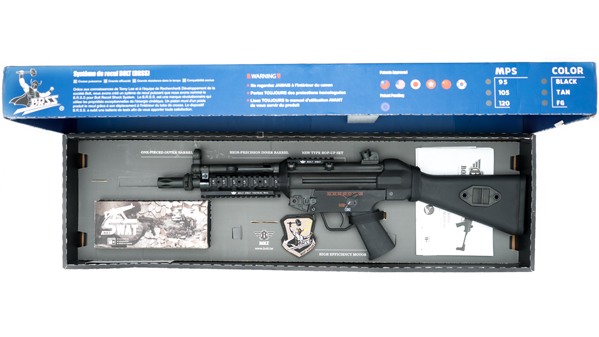 When I looked inside of the box I noticed another small box that containd a hicap magazine, further lying around loose in the box was a manual, some papers, a patch and a test paper with test results of FPS gram bbs and the tester who signed it. The gun was strapped really good with some velcro. 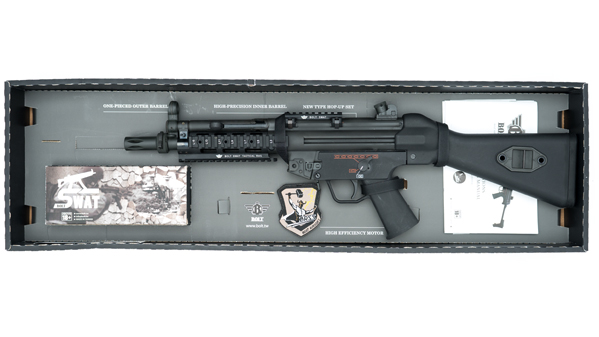 This MP5 is a new type of model that I never had the chance to try myself untill now. And when holding it I must say the weight is quite nice, the downside of this replica is the weight distribution most of the weight is in the front and you’ll notice it really quick when you hold the rifle. The fixed iron sights are pretty solid, front sight is not adjustable and the back sight has a rotary were you can adjust the sight holes.

What I like about this replica is the rails on the front, most of the MP5’s that I have seen don't have any rail on the front so that’s a big thumbs up for that. The flash-hider can be removed with a lever for quick switching to a suppressor.

On top there in the middle of the upper there is a small piece of rail where you can attach a reddot sight, not all sights will fit because this rail is a bit smaller than the normal picatinny rail.

The sides of the lower you’ll have a ambidextrous selector switch witch is a bit hard to operate, a bit stiff but maybe after time it will go smoother. 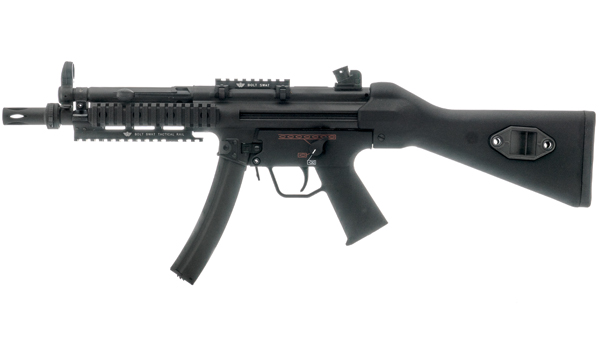 Straight out of the box

What you see is what you get: 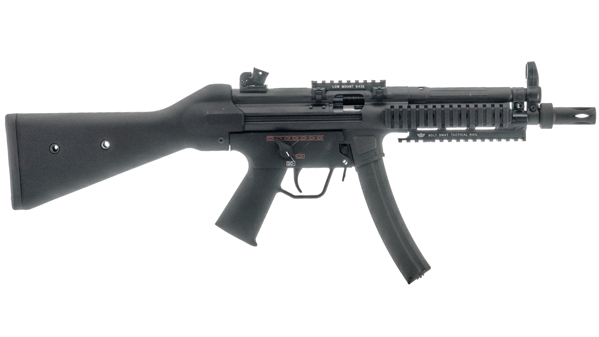 - a box with a 200 round capacity magazine in it 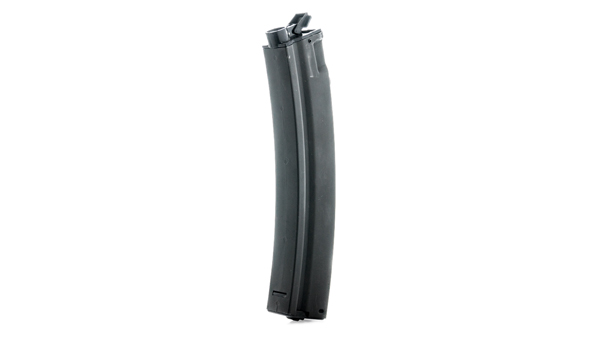 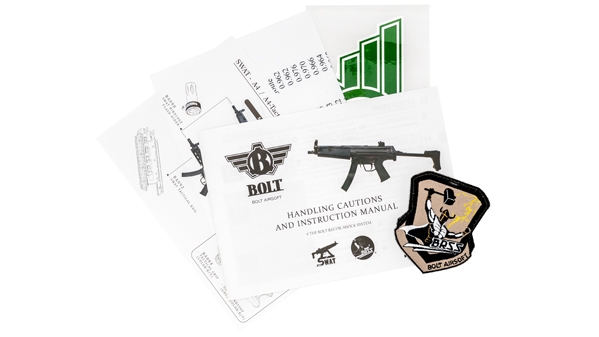 So I had a little problem with this AEG on the field luckily not in the heat of the moment but just when I wanted a little bit of action. When I was pulling the trigger it looked like it was totally a week because the sound it made was horrible like if the gears in the gearbox were totalled.

After dissembling it there was nothing to it, the bolt was just locked.. I don’t know how or what caused it but it just did after 1,5 skirm.

After taking it apart I was surprised to see a V2 gearbox, most newer replica’s have V3 gearboxes but taking that aside we are taking a look inside this beast.

Hopup
For a plastic/polymer hopup it is very durable/sturdy. When I play with the hopup I don't see that much of adjustment of the nub.

Motor
For the MP5 they use a High Torque Motor BM300T, can't say how much rpm it gives but it works fine 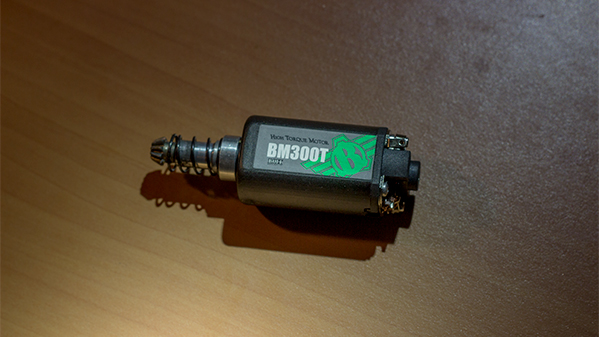 I’ve opened the gearbox now like 4 times because it jams, I think because it jams of the anti-reversal ledge (ARL) who is a bit strange.. never seen a ARL like that. I'm used to having a ARL that's curved and not straight cut at the end. 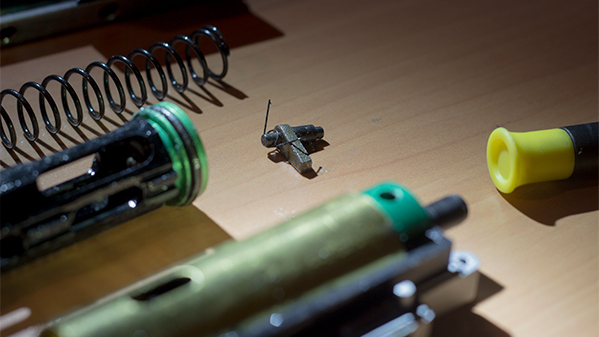 The piston is a metal piston, the tooth are all metal and the piston head looks pretty good. 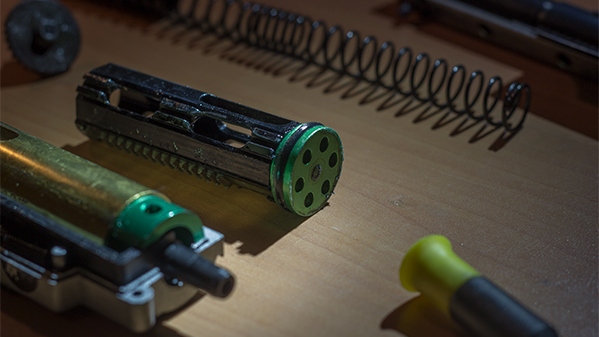 When I looked at the gears I see that the spur gear has the Bolt logo engraved on it, I noticed that the gearbox was shimmed, what is pretty nice! 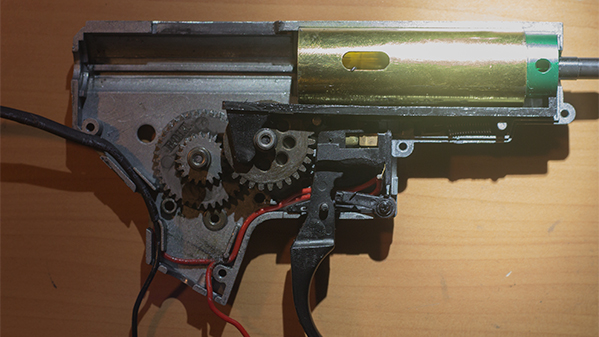 If you look at the photo here above, at the top of the gearbox shell you can see a little bevel there in goed the "bolt" that gives the Electronic Blow Back 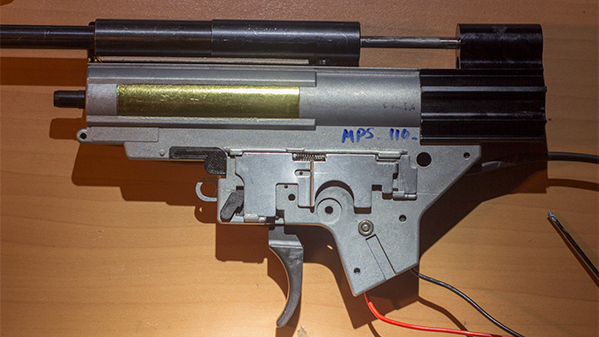 When the gearbox is closed you can see the steel rod on top of the gearbox shells, the metalic piston pushes the bolt back and forth.

Stock
The stock is a big fixed stock, it has a lot of space inside. It feels pretty good against the shoulder and is not to long and not to short. The space inside the stock can easily take up the biggest lipo's I own myself.

Lower
As we take a look at the lower, I see that it's made of a rough kind of polymer, it feels light but robust. The pistol grip feels good in my hands, because it feels a bit bigger that a normal grip.

When I hold the grip I can easily reach the selector switch with my thumb and index finger but the switch is nog smooth and needs a bit force to handle it, when I opened the gearbox for a couple of times I had to remove the selector switch and now it is going smoothley.

The trigger is a nice standard one, the pull of it is descent you dont have to pull it that far to have it shooting. 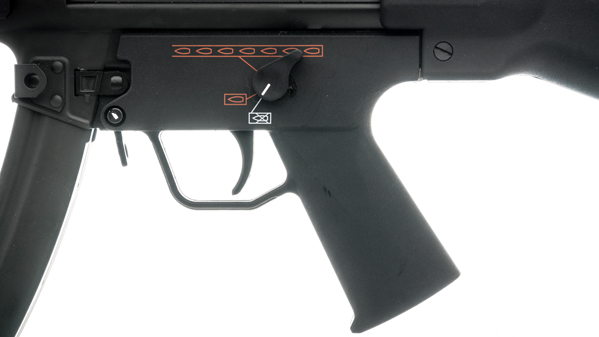 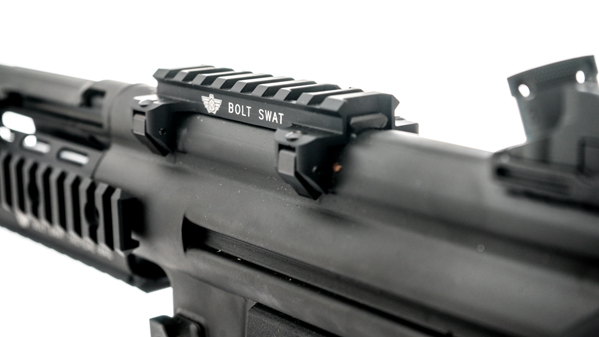 As you can see in the picture the window is open and now you can adjust the hopup to slide the little black lip to the front for less hop or slide it back for more hop. 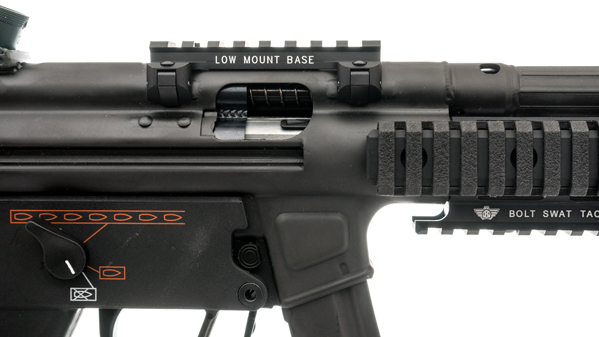 At the bottom rail you also can see markings on the sides, logo from BOLT with the text: BOLT SWAT TACTICAL RAIL.

When you get the MP5 you will get some documents with it, there you will see some kind of certificate with testing results in FPS and Joule so that’s nice!

I did my own FPS measuring and it came a long with what was noted on the FPS documents. 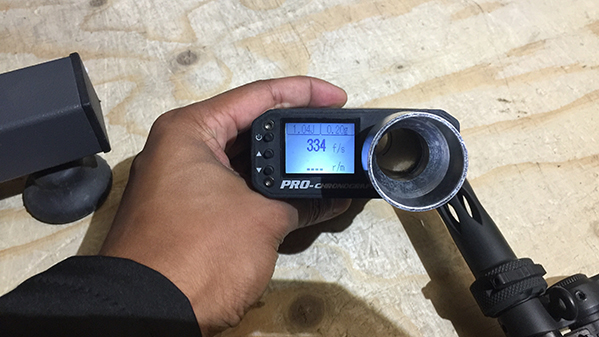 FPS results were quite nice, all inside the limit. But it felt much harder :’) ..

I went to a indoor shooting range and the groupings were a bit wide but consistent.

I brought it to the field at a skirm, im not blown away fast but this thing has blown me away in the field. The range was superb for this short rifle and the accuracy was not that bad at all, except for the front iron sights that I could set right in line with the bbs path because its fixed.

For this skirm I borough some MP5 magazines from a friend of mine, some high caps and some midcaps, but the most of the mags didn't fit. The magwell was a mm or so smaller. So I had to play with 3 mags, 1 that came with the MP5 and 2 that I borough.

When I was stressing this airsoft gun I hoped it would not explode in my face with al that brute force from the EBB but it held up pretty good, when I needed it the most it died on me in game.. I couldn't believe my eyes.. I tried some things I came up with in the field but that didn't helpt at all, I tought the gears were torn to shreds.

At home when I wanted to open the gearbox I saw that everything was locked, so tried to tick the ARL with a screwdriver but it didn't helped at all.

After opening the gearbox everything was fixed pretty fast. (After that I had to fixed it for another 3 times :') )

Pricing is a bit high for my taste, I found a Italian site who is selling this gun and the price is 429,99 EURO for Europe...

- QD flash hider
- Large space in buttstock
- Rails in the front for attaching a flashlight or grip for example.
- For a EBB it has a quite hard blowback

- Improper weight distribution of the replica
- Couldn't make out how to adjust/center the front sight
- For this review I borrowed some other magazines but I couldn't get them fit, looked like the mag well is a bit smaller.
- Fire selector stil stiff after playing with it and disassembling it.
- Hopup is a bit difficult to adjust (stiff in adjusting)
- Jams / ARL issues

Well.. It is not a replica I would buy that fast but it definitely has spread my horizon to look out for replica’s like these, it was a blast to play with it and people who owns a MP5 themselves wanted to know were to buy it because of the blowback.

For a short gun like this it has quite the range, I could easily hit target (with 0.28g bbs) on 55/60m and the weight is not that heavy.

Special thanks to Bolt for having us reviewing this nice airsoft gun. 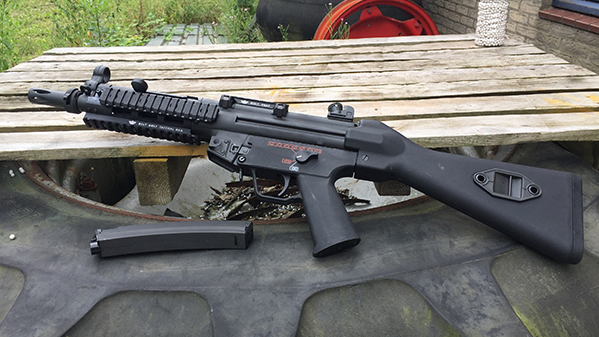