BREAKING: CYBERGUN HAS THE GLOCK CONTRACT….

Remark: Only for Military training. Nothing stated about airsoft... 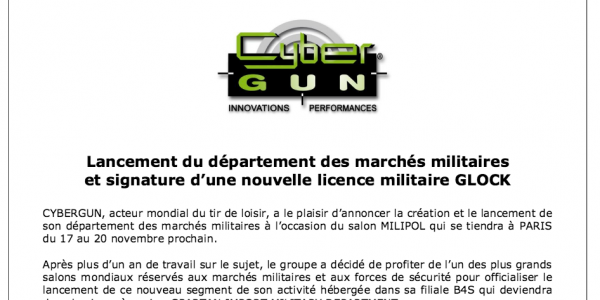 “…In addition to this revelation, the CYBERGUN Group has signed with the Austrian arms manufacturer GLOCK a license agreement to develop replicas for training for military procurement and training of forces. CYBERGUN The group will present at the MILIPOL the first two replicas from this collaboration: the GLOCK 17 and GLOCK 19.

BRUGIERE Hugo, who negotiated with the GLOCK group, said: “This is a job for several months that allowed us to obtain, through an order of the French Government, the authorization of the manufacturing of very large arms who never wanted to give licenses to date. Their trust honors us as much as it forces us. The quality standards, respecting the spirit of the house GLCOK and the need to generate among trusted partners have guided our work. The French versions delivered to the Ministry of Interior will be produced and partially assembled in Germany.…”

Remark, nothing is known yet for the worldwide Airsoft industry. Wondering how long it will take till the airsoft industry can enjoy GLOCK licensed products and finally settle all the husstle regarding trademark infringements etc.

We are checking the story as we speak and will develop the story once updates arrive...

@SlickAxe @GLOCKInc @Thumpy3D For the time being it's a military and law enforcement license to assign this market training needs.

The first Glock airsoft replicas that will be released will be the Glock 17 and Glock 19 and they will be presented during MILIPOL Paris on the 17th to the 20th of November 2015 and Cybergun is also expected to deliver airsoft Glocks to the French of Ministry of Interior. It is with this large order from the French government that finally clinched the deal for Cybergun to bag the Glock airsoft licence for the military and law enforcement training market.

Cybergun's planned increased in capitalisation will allow the company to devote a portion of this capital to develop their newly announced Military Markets Department through the "Spartan Imports Military Department" as Spartan Imports is the big airsoft distributor that they acquired early this decade. The new department will then focus on Military and Law Enforcement training markets given the contacts that Cybergun has developed over the years in the military and law enforcement communities. It was mentioned in the press release that they already have several government agencies and forces as customers.

Also to be revealed during the MILIPOL Paris 2015 apart from the airsoft MIL/LE Airsoft Glock 17 and 19, Cybergun will be the SIG SAUER SP2022 TRAIN and MOSSBERG TRAIN 590 which are specially designed for the military market.