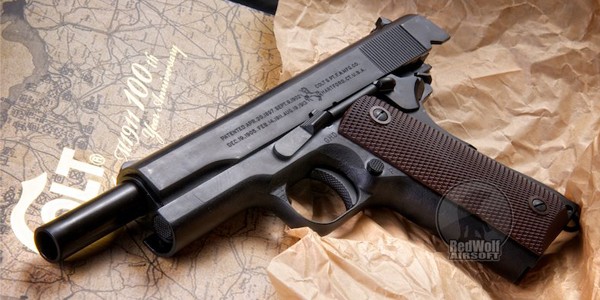 Inokatsu has finally released their M1911 100th Anniversary Edition CO2 blowback pistol. We have seen the very impressive LUX version during IWA 2012. This regular 100th Anniversary Edition does not come with Colt wooden box, but instead comes in a regular box instead.  Licensed from COLT and molded after blueprints provided by COLT, the gun’s frame and slide are manufactured using real steel manufacturing techniques.  Authentic markings grace the gun to commemorate the 1911’s century long heritage and service with the United States Armed Forces. The shooting experience is like no other Airsoft pistol on the market. Continue reading for more details...

While this regular version will be available in larger numbers than the limited edition LUX version, supply is still limited.   If your neighborhood shop does not carry it, tell them to give us a call!   It comes with a CO2 magazine, and you can purchase optional KJ 1911 green gas magazines as well.

Given the quality and real gun manufacturing processes involved in making this gun, this is the most realistic 1911 ever. But then again, you never expect Inokatsu guns to be economical given their collectible appeal and low volume manufacturing techniques.

The Inokatsu 1911 can use both CO2 and regular green gas magazines from KJ Works (100% compatible), although the performance with the KJ CO2 magazine is better than the green gas version. However, do know that the KJ CO2 magazine comes with bumper - which if you feel is unsightly, can be replaced with the regular green gas magazine which has a flush base plate for a more realistic look. But the green gas one will only work the gun with crisp blowback in warm weather.

The recoil spring is noticeably stiffer than normal airsoft pistols, which gives this gun a much more realistic feel. The sound that steel-on-steel emits is also different than your regular aluminum or die-cast metal guns. The shine, texture and the way the light plays off the surface is also quite different - which tricks most observers into thinking this is the real thing! Real wood checkered grips provide that authentic feeling.

Not designed to be a high powered skirmish gun at 300fps, Inokatsu's engineers channeled most of the gas back to blowback the heavy steel slide and overcome the resistance of the stiffer recoil spring. As with most Inokatsu's, the shooting and user experience is what matters most. That's why most collectors who live in countries where real guns are illegal feel that this gun is the closest they can get to owning the real thing.

RedWolf is the global distributor for Inokatsu, this M1911 model comes in for a hefty 860 USD. It looks like the best M1911 out on the market, so you pay the price. Based on what we have seen at IWA 2012 we certainly think it's worth it for those who are really into this model and like realism.