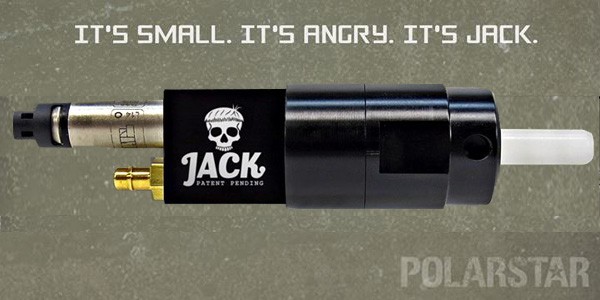 Polarstar is well known because of their high-end HPA systems and their current Fusion Engine model. In June they will come up with tomething new, the JACK! A small drop-in HPA system comparable to the SMP/HYDRA system we have seen at IWA 2015. It will be released in June 2015 at an interesting pricepoint (low 300 USD). We continue to enrich this article with all the latest info regarding the JACK. Continue reading to check our FAQ about the JACK!

Quick specs of the JACK HPA system is a range of 280 - 500 FPS with a .20g BBs. Velocity can easily be adjusted (it offcourse depends on the barrel length). Rate of fire at 30+ rounds per seconds. Air efficiency at approx 1000 rounds from a 13ci/3000psi cylinder before a measurable drop in velocity.
UPDATE 16/05: It's official now. Pricepoint at 315 USD!

There are a few questions, as well a lot of speculation, circulating about JACK, the F1 and the Fusion Engine. Polarstar compiled a list of the most commonly seen inquiries to make sure everyone has the right information, and the right story. Check the small FAQ below:

What is "JACK"?
JACK was designed to answer the demand for an affordable, high performance HPA conversion for AGE's. The system is a drop-in cylinder replacement that will be universally compatible with a wide range of gearbox versions that have center-line nozzles.
Similar to it's sister product, the F1, it replaces the origional gearbox components with a programmable pneumatic system allowing for higher performance and greater reliability over a gear driven system. Although economically priced, JACK will still retain the same prformance and quality you have come to expect from Polarstar!
Jack has only 1 moving part, the nozzle, that acts as it's own poppet valve (similar to F1) which is piloted by the solenoid. The system itzelf only has 6 parts and can be completely disassembled by hand making the system very reliable and easy to maintain.
Is JACK replacing the F1?
No, JACK will be produced alongside the F1 as a sister product. It has taken longer than expected to implement some improvements we thought up for F1 so we did regrettably get behind schedule. However, the F1 is still coming.
How is JACK different from the F1?
The JACK system (codename Simple Jack) was conceived during the project which the F1 came from (codename Karl). We were only looking to make one system but JACK was so good we decided we should go ahead and make both. JACK will be the ideal system for the person looking for a basic HPA system that still delivers high performance and reliably while at the same time being economically priced.
JACK uses a smaller solenoid as a pilot valve to open a larger poppet valve (similar to the Fusion Engine poppet but integrated as one piece with the nozzle) through which the firing air travels through from the air input line. Since JACK can use a smaller solenoid this helps keep the cost down but by design the system will be slightly less air efficient. It will be considerably more efficient than a stock Fusion Engine but not quite as efficient as the F1.
Both the F1 and JACK are open bolt systems and will offer very similar performance as far as how the BB goes downrange. Both also offer tool-less disassembly (after removing it from the rifles gearbox) so maintenance is very simple. In fact, either system can be broken down for maintenance in a matter of 15 seconds or less. They also are both able to use the same electronics so the F1 FCU and switchboard, as well as the future Blue Tooth FCU, will be cross compatible between the two models.
Is the Fusion Engine being discontinued?
No, the Fusion Engine will remain our flagship product for the foreseeable future. While the Fusion Engine may not be as universally compatible as a cylinder replacement system, it offers performance and features which simpler alternatives can not deliver.
Will JACK have offset nozzles?
While there is enough room to accommodate offset nozzles in JACK's design, currently we only plan on offering JACK in a center-line configuration to keep cost down while the F1 will have both center-line and offset nozzles available.
Does JACK still use an FCU?
Yes, both JACK and the F1 will use the same FCU and internal switchboard so the same electronics can be used to run either system. The FCU is the same design as the Fusion Engine FCU, only with different firmware since it is only driving one solenoid instead of two.
Does JACK use the same nozzles as the Fusion Engine?
No, JACK's nozzle is different in design and is not compatible with nozzles for the Fusion Engine, F1 or any other system on the market.
Will there be different nozzles to change FPS like the Fusion Engine?
No, JACK can achieve its 500fps to sub 280fps velocity range with one nozzle by simply adjusting input pressure and dwell.
Is the nozzle made out of plastic?
The nozzles are made from delrin which has very good mechanical properties for this application. It is strong, lightweight, impact resistant, temperature stable and is very "slick".
What guns will JACK be compatible with?
As long as the rifle has a gearbox with a center-line nozzle then JACK will most likely be able to work with it. In most cases a different nozzle or different internal switchboard will be the only things required for JACK to work with different rifle models and gearbox versions. We will initially release kits for the most common models (M4, AK, M249, ect.) with nozzles for other models available separately shortly following its release. And yes it fits in a KRYTAC easily!
Will JACK work in the MP7?
Polarstar is looking into options for an MP7 conversion kit. They are working with a third party (!!) on a joint MP7 HPA project!
When will we know the price?
Official pricing will be released within the next week (May 15th). Pricing will be in the low 300 USD range.
Will either the F1 or jack be sold with a battery?
It is most likely that F1 will include a high-end battery as part of the kit. Right now it is unlikely that JACK will have one included as well since they are trying to hit a certain price point for that kit. We should know this for sure later next week though.
What are the advantages and disadvantages between the "Jack" v.s "F1"?
In a nutshell, F1 will be slightly more air efficient and support more rifle models (center-line as well as offset nozzles), while JACK will be less expensive. Both will have the same level of quality and reliability as well as having nearly identical performance as far as velocity and consistency.
Is jack actually loud? More so than the F1 or Fusion engine?
It's actually really loud. The muzzle report has a noticeably sharper crack than a Fusion Engine. Check the sound in this video where the new JACK is installed in a Krytac CRB.