Celebration with a special edition model... 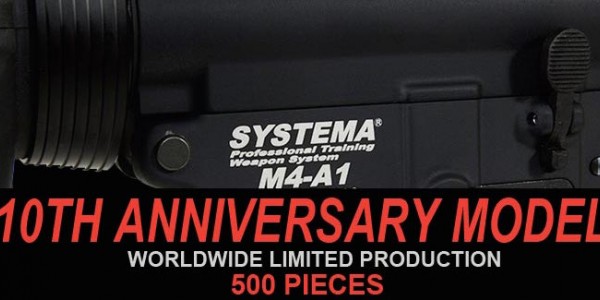 Damn already 10 years! I am getting old. Back in 2004 we did our first review on the Systema rifle's. We were blessed to receive 2 M16 models to do a full blown review. Now Kumi mailed us with their special Professional Training Weapon (PTW) model to commemorate the 10th anniversary of the introduction of the PTW. Damn already 10 years! The lower receiver will have a special engraving indicating it is the 10th Anniversary commemorative model of which 500 pieces will be manufactured and made available globally.

For airsoft players, the Systema Engineering PTW line is what they call the Ferrari of airsoft guns, not only because of the cost but also of performance. Some highly-trained airsoft players always swear by the PTWs and the ability to customize PTWs with many commercial off-the-shelf parts from real steel parts manufacturers usually without the need for modification. Thus, most of the weapons accessories and external parts that Systema PTW users usually purchase can be readily used on real steel M4s and M16s.

Initially known for their high quality upgrade parts for airsoft guns, especially the Marui-compatible models and also complete AEGs based on Tokyo Marui's version 2 gearbox in the 1990s, Systema Engineering revealed the first PTW prototype during the SHOT Show 2003 though the actual production models of the first PTW was released in 2004. Specifically made to cater to Military and Law Enforcement training markets, the PTWs are very much precisely made to mimic the real steel AR in terms of weight and dimensions as these are truly 1:1 to meet training weapon specifications.

The PTW is also ground breaking as it the first to feature a split (or break open) gearbox design, like the ICS M4 AEGs but its Planetary gearbox is totally different from Marui designed gearboxes and power-ups through the use of cylinders which eventually were copied by other airsoft manufacturers. This design also allows for realistic takedown of the training weapon. With durability, high performance, and 1:1 scale, even with a high initial price, Systema PTWs deliver the most value in the long run due to cheaper ammo costs as compared to the use of simunitions or paintballs as ammo for training and high level of safety.

Among airsoft players, there is a loyal following among PTW users and usually they are found PTW User Group Forum. Many players, if given the budget and chance to buy a PTW, would grab that opportunity and join the special PTW User Group.

Interested airsoft players who want to own the 10th Anniversary PTW Commemorative Model can contact their nearest Systema Dealer to inquire about pricing and reservations. As for the details of this model, here are some initial information: