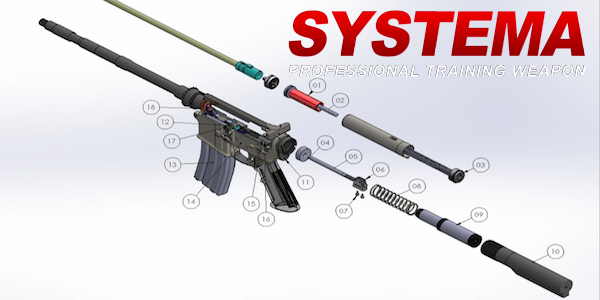 The most expensive Airsoft AEG is ready for sale. The new SYSTEMA PTW Recoil Model is currently distributed to dealers and will soon hit a retail store near you! Beware, this new model comes with a hefty price, with such a price it is only for a happy few around us and mainly aimed at military usage. Do know, the first time lot will be 1000 items only. Sales will be limited to the MAX2 / Ambi Model only at this time.

"We regretfully state that, for the Recoil Model, we plan to sell the finished product for the time being. We are sorry to those who wish to purchase the Challenge Kit. One of the reasons for our decision was the degree of difficulty it takes to manage the cable connections of the Micro Switch Device. Once we gather enough materials and information to complete a thorough assembly manual we may contemplate a release date for the Challenge Kit. We kindly ask for your patience."

So what's so special about this Recoil Model? Did you know the battery is now moved to the magazine? Continue reading to have a technical deep dive into this new SYSTEMA PTW Recoil Model

Let's start with the major changes to the platform:

Major changes to the platform
Last year marked the 10th anniversary of the P.T.W. to which we have continuously been improving all of our parts throughout the years. Meanwhile, they maximized the merits of the unit's structure to maintain the affinity of the conventional model. In other words, as we continued to improve upon the parts, simply incorporating it with the base structure would give it the same performance as the newest model; this was our continuing promise to our loyal customers. However, I broke this vow and we made changes (albeit partial changes) to the core platform; but in doing so we were able to achieve the new "Recoil Shock System". In addition, the battery has now been moved from the conventional stock tube over to the magazine that is equipped with the Recoil Shock System. Therefore, the contents of this remodeling is close to a complete change. We would like to introduce the details to all of the new parts.

Patent Pending Recoil Shock Unit mount New Mechanism
The mainstream method to acquire the recoil shock was conventionally brought about from the Buffer Spring structure. Conversely, the accumulated pressure from the buffer spring and the release of the spring tension due to the inertial force of the weight combined with the crashing force produces the recoil shock. This also happens with Gas Blowback guns as well, the inertial force created from full auto firing gives a sense of disturbance with a feel of the whole gun pulling forward.

Therefore reversing the direction of the recoil weight from the Piston, in other words moving it towards the front of the gun, at the same time with the compressed spring releasing the piston allows the spring to shoot back towards the rear of the gun. By adding one gear to the sequence of the gear progress it is possible to reverse the entire rotary direction. By locating the parallel position of the two rack gears, the Pinion Gear is placed in between them. Then as stated earlier, when the Piston retrogresses the weight is converted to the front, the Stock Tube Buffer Spring located towards the front is then compressed. After the Piston has completed its rearward movement, rather than the Recoil Weight or significantly lighter Buffer Spring, it is the compressed air created by the strong Main Spring compressing the air within the Piston and the Cylinder causes the BB to fire.

Consecutively, with a slight timing delay, the weight of the shock strikes the edge of the Stock Tube due to the Buffer Spring signifying the end of one cycle. Although the whole movement process sounds a bit complicated, the components used to create such an occurrence is seven points, thus the mechanical reliability is quite high for this structure.

Furthermore, the primary weight caused by the Rack Gear Rod similar to the Piston Rod, is effectively designed to have a very little energy loss as it moves in a borderline to the barrel. It goes without saying, with creation of a big recoil shock it is equally important to create components strong enough to be able to handle it. Conventionally the Stock Tube served as a role of the Battery compartment, hence it was typical to create the pipe shape for that purpose. For the toy gun, by capping the pipe, it adds more realism to the shape of the real version. However, our focus was to create an ever more durable performance, by adding a bowling method to our solid material we were able to achieve the production of our Stock Tube that rivals the real firearm version. The thickness is 6mm, therefore it is just as durable for use on a real firearm. We believe that you can enjoy firing Full Auto with peace of mind. 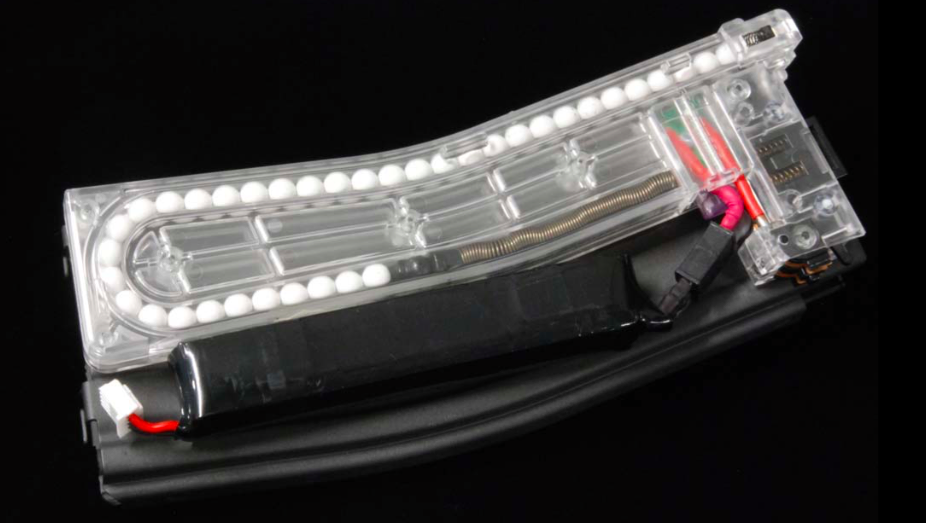 Magazine with a built-in battery
Recoil model exclusive Li-Po Battery, this model has the Battery incorporated within the Magazine. The rating for this built in Battery is a new cell model rated at 800mAh / 25C. With a very large electric discharge property this battery will last approximately 3 cycles (of 50 rounds per cycle). With a slightly special shape, this battery has a Micro-T connector and a balance charging cable installed in opposite directions of each other. As a result it is possible to charge the battery with it still in the Magazine. Simply removing the Bottom Plate will gain access to the balance charging cables. Because the cable is rather short, there is an option to purchase an extension cable. When charging, please remove the magazine from the receiver as leaving it in the receiver is very dangerous.