Ready For Release Next Week! 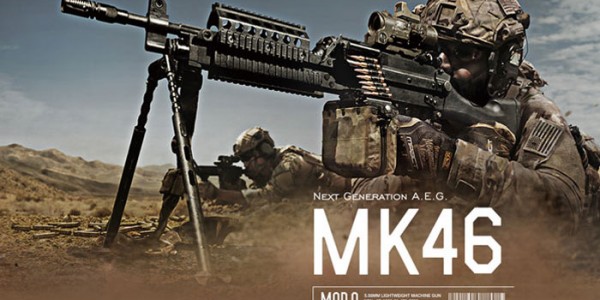 There is high anticipation with the release of the Tokyo Marui’s first support weapon AEG offering, the MK46 Mod0 NGRS. Years in the making, this was first revealed last year at the 5th Tokyo Marui Festival to the surprise of many. It has been a wish of many airsoft players that the venerable Japanese airsoft manufacturer release a support weapon for many years now. They finally get their wish and it comes with features not seen in other airsoft support weapons based on the M249 design.

Now, the only thing that those who want this weapon is the cash as it costs JPY 148,000 (US$1,360). If you want to burn all your Christmas shopping money on just one thing, you might want to put it all on this and pray that you will not get a buyer’s remorse afterwards.

As mentioned above, it has features not seen in M249 airsoft SAWs as the company works on realism and experience in using the MK46 Mod0. The battery battery change mimics barrel change and it uses which is an AK-type stick AEG. Since it is an NGRS AEG, it has the shoot and recoil engine with strong kick. Setting the BBs is by pulling the cocking handle. With the 1,000 round box magazine that comes with dummy belt, when fired, it can simulate ammo feed which even it is not an actual ammo feed, looks cool for its mimicking it.

This also comes equipped with a MOSFET and protects the switch. The NGRS AEG cannot be operated when opening the feed cover or when the barrel is removed for a battery change. As for firing modes, it is a full auto airsoft SAW, designed to spit out BBs to keep the OPFOR heads down or think twice before making an offensive.

In terms of weight, it is 3.3kgs with the battery installed, which should not be a problem for those who have been used to carrying EBRs. If you need to transport it, you can opt to have the J-Tech gun bag that is well-built, using YKK zippers and loaded with pockets to carry the accessories and spare drum magazine with it. Optional accessories include rail covers, PEQ boxes, optics, red dots etc. and since the flash hider is removable, you can get the mock suppressor and a new tracer unit to go with it. We recommend the tracer unit as it is always a treat to watch BB tracers stream a light show when used in the dark.

The price may be a hindrance for some, but pre-orders are up. For buyers outside of Japan they may need to wait longer as the company is already backed up with pre-orders locally.